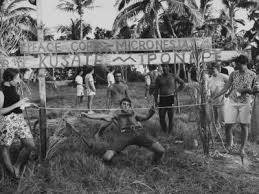 I was so excited to hear from an author directly and when he mentioned he was also a Returned Peace Corps Volunteer (RPCV) I was ecstatic! He told me his Brenda Contay series was based on his experience as a Peace Corps Volunteer in Micronesia and I was sold. I read The Anything Goes Girl (TAGG) and LOVED it. The whole time I was reading the book I was there, I could envision where we were and what we were doing. As I was reading it I could imagine that parts of the book were due to his experience. There was so much of the book that was different than most authors and I was so curious!!

There are oftentimes when when I really want to sit down with the author and ask why they did such and such. I am so lucky that he contacted me directly and I had the opportunity to email my questions. He was gracious enough to answer me! Below are my questions (in bold) and his answers. I asked questions that aren’t the norm because he didn’t write the norm.  Enjoy!!

Why did you choose to base TAGG in 1998?
I wanted freedom to use my memories of PCV service, and didn’t want them to clash too obviously with the current moment. In the Brenda Contay series, I am also working with a timeline for the character. She’s twenty-eight when the series starts. She’s five years older when Deep North takes place. She will be thirty-four or thirty-five in book three, thirty-seven or thirty eight in book 4, perhaps pushing forty when the series ends (that’s the current plan) with book five.
I’ve noticed you choose your main characters to be very different than yourself, for example dogs or women. What made you decide to do that and do you find it difficult? Do you check in with your dog or the women in your life to see if you got it right?
I can’t adequately explain for you, or for myself what the essential reason is for choosing to use a woman as my central point-of-view character. I have adult stepdaughters to whom I’m very attached, but no children of my own. That may be part of it. The rest is very practical: more than seventy percent of fiction is bought by women. Translation: who in his right mind wouldn’t write for women? I hope, of course, that I’m writing for both men and women, but the central audience is women.
As for dogs, how can I explain it? I’m really sort of obsessed with them. It’s the way they look right at you, the way you can talk to them, and in some limited sense, know that they understand the tenor of your voice, and what you’re saying. Since you ask, I am proud of myself for giving Freestyle, the black lab on Pirim atoll in TAGG his own point of view in the book’s prologue. The agent who handled the book (but didn’t get me a deal) was very dubious about that, but I insisted on it. Then there’s Sonny inDeep North. I also wrote a short novel for adults about dogs, called Just Bill. So, I hope you get the picture: I’m a dog nut.
In TAGG I loved that several of your characters were in interracial relationships. Is there a story behind that?
The novel was first drafted quite a few years ago, before it was taken for granted that Americans of color could or would be in science. That’s why the entomologist on Pirim is a black American. As for Vince Soublik having a relationship with a black student in college whose well-off parents don’t want her involved with a white, that isn’t new, but it was “different” at the time. Vince then becomes involved with a Micronesian woman on Pirim, and that’s just what happens to people who come together in strange places. Or anywhere else.
Was your description of how to get to the island similar to how you got to the island when you were a PCV? Where was your training held and were there other volunteers on the same island?
I actually served with perhaps twenty or thirty other Volunteers on the largest island in the district, Pohnpei. I taught school, and then worked trying to find college scholarships for Ponapeans. Other Volunteers served alone on atolls, as Vince Soublik does in the book.
How I got to Pohnpei is bizarre in the extreme, but the description of the trip by small ship to Pirim atoll is taken from travel that was part of my job in my second year of service: going to outer islands to administer tests for the district’s education system. Much of the detail I use is taken from those experiences–but the ship I traveled on didn’t get hung up on a reef.
As for training, I was part of the first contingent of Volunteers to be sent to Micronesia. My group trained in Key West, Florida (another weird story), the other half in Molokai, Hawaii.
Did the elders give you a title like the PCV in your book?
Yes, I was given a small title, purely as a courtesy. But titles were and probably still are an important part of Ponapean society.
Along with suspense and mystery there was a lot of science, genetics and bugs in TAGG. Is this something that has always interested you? Is this research actually being done somewhere in the world?
I’m glad you asked. In the credits for TAGG, I acknowledge the help of a friend, Michael Wider, PhD. I am essentially ignorant when it comes to science. I’ve read a bit about neuropsychology, but that’s about it.

I am very proud to be a RPCV, I served not only my country but also Mexico where I lived for two years. Although we don’t always have bullets flying in the air we certainly make a sacrifice to serve and it’s because we want to make a difference in the lives of the people we serve. It changes you for the good!
I was honored to be asked to read this book so please support Barry and read The Anything Goes Girl and Deep North (to be released soon). Thanks for reading my blog and supporting authors like Barry – Happy Reading! Craisie Daisie